Its finally here. The Wima highlight of the year. The Rally.
Since January we are busy with the journey planning, have bought ferry tickets and have closed gaps in the equipment.
After all it goes to England and there it is known that it is often wet in August.

It’s hard to put the essence of a WIMA rally into words and to live up to it. Every year we fight to plan our summer so that we can participate in the rally.

The duration of the rally is usually 5 days. From Monday to Friday.
Sunday and Saturday are usually arrival and departure days.
Due to the location of Castleton (the venue) in the Peak District a varied programme can be expected again.
But the most important point is the meeting with friends from all over the world.
Rarely everyone, but in the course of the rallies more and more familiar faces and sometimes friendships for life. 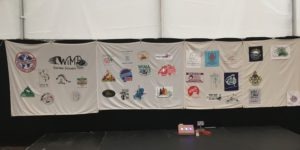 The opening ceremony took place on Monday evening. We were welcomed by Val (President of Wima GB) and inaugurated into the Does and Dont’s of the rally, as well as the weekly program.
The program of the first day included various sightseeing tours in the surrounding area, e.g. the Blue John Cavern, where a rare multicoloured gemstone has been mined for centuries.
The name of the stone, Blue John, comes from its colours and the fact that in the first days many French miners worked in the mines. In French, blue is blue and yellow is jaune 🙂 Linguistics is fun!
On the same day also driving trainings with IAM instructors, who – completely British – took their task very seriously. 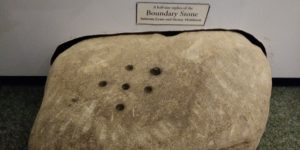 Over the days there is also a puzzle rally to complete, which goes over several pages of questions and was obviously designed by a very geography and history proficient professor. (Who is apparently also enthusiastic about motorcycles 😉 )

And, of course, on Thursday, the parade that will take us to Chatsworth House.

The evenings are of course packed with music and dance, as well as entertaining chit chat.

Somehow it is always amazing how it is possible to accommodate and participate in so much program in 5 days.
It wasn’t tiresome, not a bit. Even the running rain could not stop it.

Wima Austria was completely accommodated in one room, but due to the spacious rooms of Loosshill Hall, there was never any camp fever.
The participants in the tents had less luck here.
There were reports of snails in their boots…, sheep were all over the lawn.
And the constant rain, at night temperatures in the single digits, did not make it any better. But, there was not a single annoying face to see, quite the opposite! 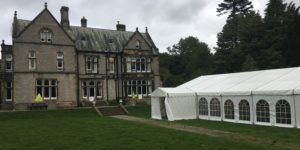 The Losehill Hall was a perfect place for the rally, especially in such rainy weather. Many rooms, angles and corners where the participants could dry up, warm up and just chat. On Thursday, when the weather was rainy at the beginning, but changed into a wonderful sunny weather as soon as we left Castleton, the parade took place.
It led us into smaller groups on split across the Peak District to the south to Chatsworth House, a respectable castle, amidst a huge park and, what else – herds of sheep. Another highlight of this year’s rally was the evening meeting with Hayley Bell, founder of the Women Rider’s World Relay, and her talk on the relay and beyond. As Ambassador for Austria and as administrator in the start phase of the Facebook campaign I was there from the beginning and spent a lot of time with it and still follow the development with great interest.

Anne, President of Wima France, gave a lecture on the penultimate evening about the latest development in the Pikilily project and the progress of the riders in Tanzania (Mwanza). In the meantime there are 6 trained women and WIMA continues to support them. Next goal: to raise money for the training of another woman and to finance a motorcycle. 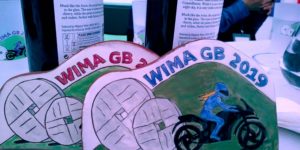 The rally quickly came to an end. There was the farewell dinner, the award ceremony. Wima Austria won two prizes! One of them was the prestigious prize for the most successful puzzle rally participation.
And as a crowning finale the concert, this time we didn’t miss it either!
Thor – the gods of rock entertained us with their 70s and 80s rock, they are really one of the best cover bands we have ever heard. 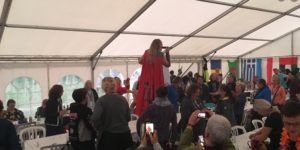 The first impulse from us and many others was to photograph or film the band, later the dance floor was full of rocky women!

Thanks WIMA GB for a fantastic rally, it was great done!