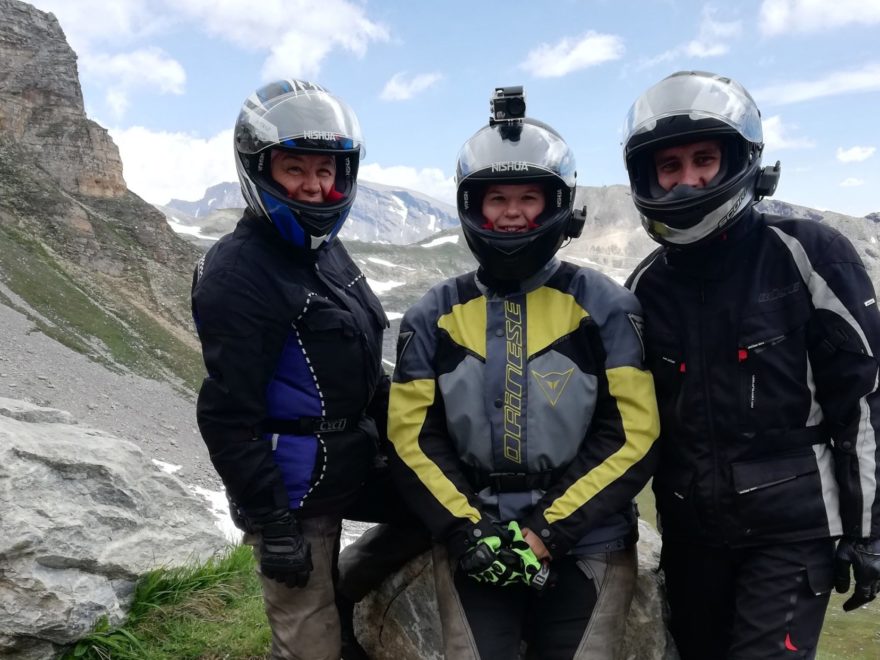 I started the journey with my mother Claudia and my partner Daniel. A Kawasaki KLE 500, a Honda Hornet and a Suzuki SV650S went on the adventurous journey. Well packed with 2 rolls of luggage each, a tank bag and suitcase/backpack, the motorcycles carried us to our first stop at the gas station.

The journey on the first day led us over the Styrian Wine Road and the Soboth, at the reservoir of the Soboth we had a great view, after 320 km we stayed overnight in Prevalje, Slovenia.

The day after, we were lead through the nice warm weather near Velenje via Gornji Grad to Kamnik – here we just touched a bicycle race. So the curves were slowed down a little bit. Arrived in Kamnik we discussed our further steps and got into a heavy rain, sometimes even hail. With the rainwear put on, the adventure continued and led us over the scenic road to Tarvisio.
One more break and then we could start towards our apartment near Lienz

In Lienz, well arrived, we started well, unfortunately the Honda Hornet had caught a big screw in the rear tyre the day before, but we only noticed this in the morning shortly before the start. With the help of our friendly host we were able to fill up the tyre with a compressor, unfortunately without success and the tyre was constantly losing air. About 120 minutes later our yellow friends of the ÖAMTC came to help us to tow the bike to Lienz. After many phone calls we found a garage in Lienz that had the right tyre for my mother. We were able to have a sightseeing at the city of Lienz during the lunch break and the tire was changed in the meantime.
As soon as we had the motorcycle back, we started a small round in the area to get the tire well run in. Over the Pustentaler Höhenstraße 1.800m we were able to cruise a few curves again. At the top we could enjoy the beautiful view, and drove down the Höhenstraße again and then back to the apartment.

For Tuesday the Großglockner was planned, only the weather didn’t quite play along. So we decided against the Glockner and drove to Innichen. There we drank a good coffee and bought good bacon. The tour led us to the Staller pass, at the top we had to take some pictures and could enjoy our good snack at the lake. When we drove the Staller Sattel back to Austria, were we could enjoy the Defereggental.

Wednesday was the big day, it was planned to climb the Großglockner. Warmly dressed we drove full of joy in the direction of Heiligenblut, what we did not know until then, was that on this day on the Salzburg side a bicycle race “Glocknerkönig” was organized. The top and the road to Salzburg was planned to be closed between 12 and 14 o’clock. In the meantime we drove up to the Pasterze and watch the glacier, which has already melted quite a bit. We decided to continue to speed up and as expected, the top was still closed, so we decided to have a snack at a nice place.
At half past two in the afternoon we didn’t want to wait anymore and drove down to our side of the mountain. Again to decide that we would go up again and maybe it wasn’t closed anymore and they let us through. Our hope was heard and we could also drive the other side of the Glockner. This day was a pure Großglockner day, because on the other side down before the toll station we drove back to our apartment, of course over the Großglockner.

until Thursday we had booked the apartment, so our departure day is pending. We planned a nice round trip over the Lesach Valley to San Candido and further over the Italian passes to Tolmezzo. Unfortunately we could not complete this tour. The road led us into the Lesach Valley to admire the beautiful pilgrimage church and to get some exercise. The motorcycles were all fine until then, sadly the Honda could not start anymore, starting hardly worked, the yellow friend ÖAMTC was called again and the bike was towed back to Lienz.

There we could change the charge controller and the battery in the workshop to be able to drive on. At this point Daniel and I drove the Pustental High Road the other way and met my mother in Lienz at the workshop. Once there, we discussed the further ride.
We decided to have a good ice cream and didn’t drive far to another quatier. In the Drau Valley we could check into a nearby hotel.

Friday was day of farewell, because our ways separated. Until Hermagor over the Nassfeld we drove together. Together we could admire the beautiful canal valley and strengthened ourselves. Until Udine Nord we drove together.
Here we had to say goodbye, Claudia’s went back alone and our journey (Daniel and me) led us to Caorle. Once there we were warmly welcomed by his parents and siblings. The only thing we wanted at that time was to get out of our motorbike clothes and go to the beach.
Here we stayed for the weekend and left Monday after breakfast.
Two days we could rest and recover, the way led us through the beautiful Italy, through the city of Grado to Monfalcone through the big breathtaking Trieste and further to Croatia, so, we had a few small curves again. Arrived in Savudrija we rested again on the beach and had a good meal.
On Tuesday we had an exhausting drive ahead of us, the first 150km we drove through narrow small roads in the back country of Croatia. About every 30km there was a small village, without the help of navigation we would have been lost there. In Slovenia we drove to Postonja and further through the beautiful country roads of Slovenia.
We were allowed to experience some nice curves and some not so nice ones. One of the less nice curves was a single lane road with a gradient of 16% and the whole thing twice. After a successful 370km we arrived at the end of the road for today and were happy to check in to our new room.
For Wednesday we had planned a little breather and did a medium sized lap. A round through the Slovenian country.
The last day led us from Leoben back home, over the country road of the Seewiesen we went to our first stop in Mariazell – a small ice cream refreshment and then the journey continued in the direction of home to the Annaberg and further over the Gscheid, the Ochsensattel.
When we stopped at the Kalte Kuchl we had a hearty lunch and then we had to master the last kilometers via Pernitz back home.

It was a successful journey and we all had wonderful impressions.