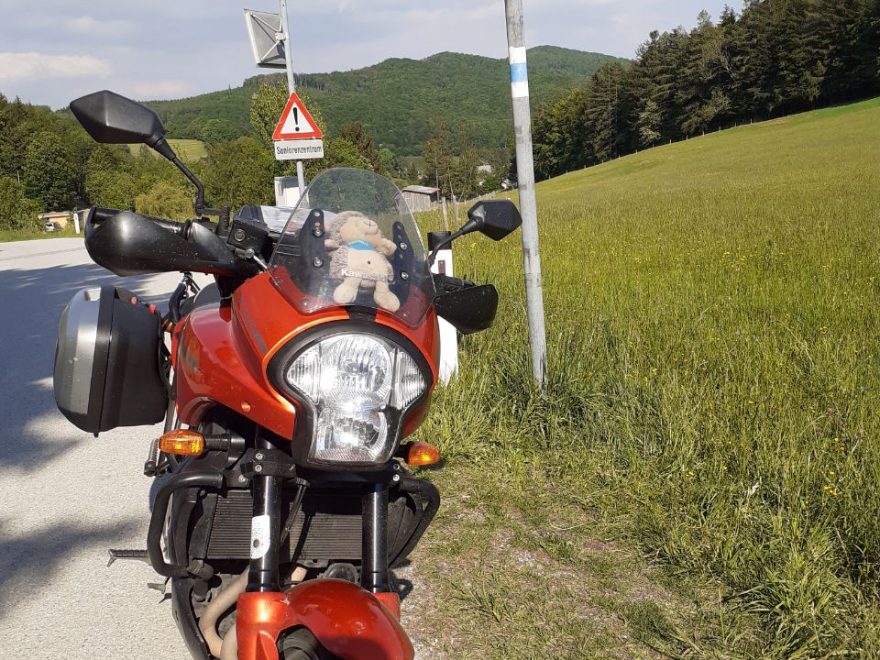 Hedgehog Otto is a little excited when I tie him to his regular spot behind the windshield of my Kawasaki Versys 650. Never before has he hibernated for six months. At the end of March he had already opened his eyes for a short time, but the measures taken on the occasion of Covid 19 made him slumber again immediately.

I prefer to have a big breakfast and prepare some provisions at this time. Who knows if the inns are really open again!
The engine starts right away, the rich singing of the engine sounds at least as beautiful as Beethoven’s Sixth in my ears. Not only Otto’s eyes flash with joy when the garage door opens at 11.00 a.m. and we drive out into the bright sun. A quick tyre check at the regular petrol station – not even a loss of pressure during the winter break – and the first drive of the year can begin.
Igel Otto, for years my faithful companion and otherwise hardly to be disturbed, today really waves to EVERY motorbike that comes towards us on the way from Vienna West to the Danube area. Rieder Berg, Sieghartskirchen, Atzenbrugg (where after all Franz Schubert lived and worked for a long time)… for about a quarter of an hour we follow the heels of a biker couple, who soon turn into the large parking lot of the popular excursion restaurant Lumpazi Bräu in Hollenburg. We are not hungry yet, the machine purrs happily with a well-filled tank. On we go. Stift Göttweig is enthroned high up on the left,

we reach Mautern, turn west, but stay on the southern bank of the Danube, because the road here is well developed, but much less frequented than the Wachau- Bundesstraße in the north.
We pass through romantic, medieval villages with venerable Romanesque churches, with winegrowers’ cottages, Buschenschanken, inns. Rossatz, St.Lorenz, Oberarnsdorf,… The famous Wachau apricot is also omnipresent outside the flowering or harvesting season: along the “Apricot Mile” we discover several small stalls selling regional products: jam, juice, liqueur, schnapps. All right, Otto, I say, and take my hand off the brake lever. That’s right. So the schnapps bottle stays in the shop.
From high above, the ruins of Aggstein Castle look grimly over the river and the wine and fruit cultures that dominate the valley. Again and again, cyclists have to be watched out for, who today frequent this section of the Danube cycle path running parallel to the river bank.

The snack station of my friend Patrizia, located directly below the castle and monastery Schönbühel, is still closed. After all, the later Empress Sisi had already spent the night here in the inn on her way to Vienna, for her wedding with her Franz Josef. But Otto and I have to stop somewhere else, and I decide to take the ferry at the landing stage below the Benedictine abbey Stift Melk. The cozy guest garden, located directly on the Danube, has often proved to be a meeting place, and I hope to be able to travel the second part of the tour together with Chris. Normally the passenger ships from which the tourist masses pour into the city and the baroque abbey are moored here, but today everything is peaceful and almost idyllically quiet. Just as I start to type a message to Chris, she calls. From her location in Pöggstall it is only about 25 kilometres to Melk, so she will be there in about half an hour. After the fried pike-perch, there will be time for coffee too! In fact, at the calculated time I hear the familiar hum of her black Versys. So the lunch break is extended so that Chris is also fed.

On the way back, the road is quite curvy through the gentle hills of the Dunkelstein forest. Apart from us hardly anyone is on the way. We quickly overtake the few Sunday drivers. In the light of the late afternoon sun we enjoy once again the wide view over the southern pre-alpine landscape.
Chris is worried about her good cake, which she has stowed in her backpack since the morning. She took it with her from the pastry shop Schörgi in Grein on the Danube, which is very popular not only with bikers.

That’s why she decides to drive from St Pölten directly on the motorway to Vienna. Igel Otto and I cross the Vienna Woods for another hour, deliberately not leaving out the small town of St.Corona (!).

It is already dawning when we arrive in Hütteldorf. Otto wants to stay on the motorbike, but now he is complaining. First, because he didn’t get any of the Schörgi cake, and second, because he expected to ride more than 220 kilometers on such a beautiful early summer day.
Good, Otto! Next time…