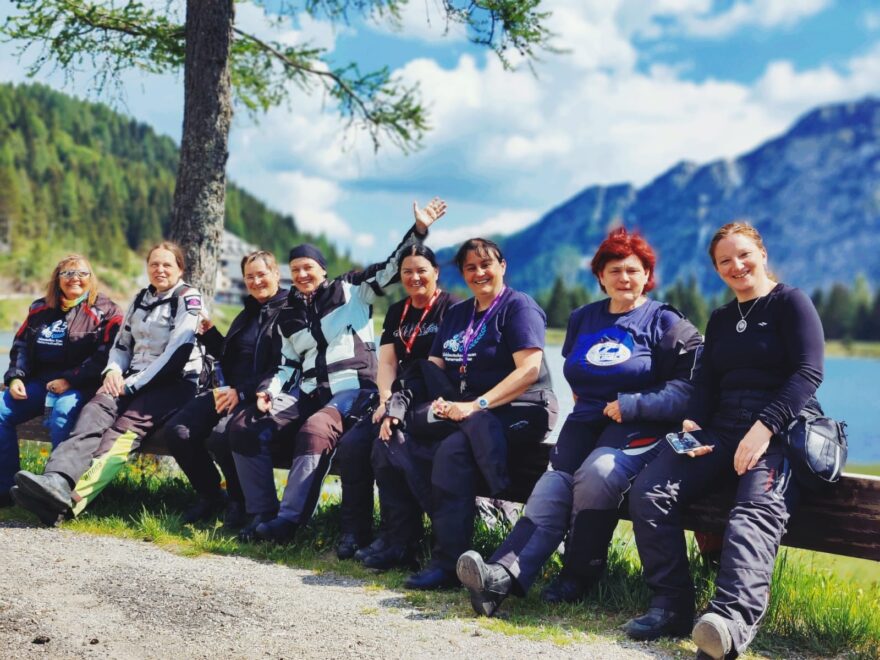 It’s strange how quickly things can become routine.
In August 2020, in the midst of the Corona pandemic, the WIMA-Austria D.A.CH meeting took place for the first time. We had been looking for a similar setting for a long time. But the cancellation of the international rally gave us the chance to actually hold such a meeting.
Even though not everyone had time for it. It was a success.

Even then it was clear that there had to be a repeat.
This time it was not a short-term replacement of a cancelled event and for that reason alone there had to be a programme and a little organisation in advance.

Our Carinthian girls set out weeks in advance to put together a round tour programme around the planned event location at Lake Keutschach, including interesting places, undiscovered spots and winding paths.
Besides Carinthia, Slovenia and Italy were also on the “menu” and with the help of both countries (in Slovenia even under the guidance of WRWR Ambassador Nadja Kaplja) it was possible to put together a day tour in each case.
So all days were well filled with routes and now only the weather and – don’t forget – the COVID guidelines had to play along.
So the last weeks became a gamble. Slowly, the Covid numbers in Austria dropped, many of us had already been vaccinated, and the government decided on first Covid relaxations for hotels and gastronomy. The roughest obstacles were removed in time for the event. Travel to and from abroad was also drastically freed from restrictions.
This suddenly made trips to I and SLO easier to carry out.
Well, as always, the WIMA spirit has done it again, almost all obstacles have been removed, so it can really start.
The journeys are made individually by smal groups, so there is not much to report for this part.
But we will start right away at

with Slovenia .
Nadja has kindly agreed to sacrifice her last day before a planned Dolomite tour for us and is doing the guide. Many of us still remember Cerkno 1,2,3,4 (sorry, inside joke). And even though Versya is now owner of at least 3 highly detailed maps of Slovenia, its better safe than sorry.
We meet at the Seebergsattel about 15min late, but the petrol station in Eisenkappel was hell. Here Versya’s bike falls over – for the first time.
From the Seebergsattel we go straight back down to Planšarsko jezero, the first lake on our tour.
The next lake is Bled. Together with the church island and the striking castle towering over the lake, a good place for a stop in the heat.
Now we continue further into the Triglav National Park. We also pass the first sites of famous Alpine events, another lake is on the way Bohinjsko jezero.
We also pass the Pokljuka biathlon stadium. Versya is even filming there with a drone.

As it is a dead end road, we drive back again.
Versya is driving at the end, happy not to have to drive at the front for once. When she notices that the mobile phone she used to steer the drone is missing, she stops and lets the group continue. When it is clear that the mobile phone is only in the wrong pocket, she tries to catch up with the group again.
She almost succeeds, but with the group in sight, she makes a mistake and the curve amd leaning just doesn’t work out. In addition, the studded tyres are not optimal for speed and cornering and so it becomes a storybook lowsider.

The advantage: apart from a few scratches on the additional tank, nothing moving in the world happens. The next bends, however, look very angular for her 😉 .
The group is only caught up at the end of the valley.

We continue on small paths to Kranjska Gora, past the – how appropriate – Korona Casino to Jezero Jasna, the last lake on our tour.
The day has passed at a leisurely pace, now it’s getting close time to return to Austria.
For this we take the Wurzenpass, while Nadja goes back home to pack.
For her afforts many thanks again for the time and ways we got from you.

At the Wurzen Pass there is an old T34 tank on the Austrian side, why is it standing there?
At home we googled it and it turned out to be a reference to the Austrian defence installations from the Cold War, which can be visited in the bunker museum there.
Aha, we learned something new .
In the evening we have a big round on the terrace for the first time. It is wonderful to end a day of driving in this way, and even nicer when the temperature drops along with the sun.

The next day was the day of different paths.
One part of the group went in search of answers for the riddle rally, another wanted to give Slo another opportunity to shine. And, for a very small part, it was off from Magdalensberg for a gravel tour through NO Carinthia. But before that, testing was the order of the day. Not only the hotel, but also possible tour stops had to be secured.
Thank God there is a free test station on the way to Magdalensberg, in the middle of Klagenfurt, at the new square. These tests are the licence to live free for another 2 days if you are not vaccinated yet.
Test completed, and we met each other. Now it can really start.
The focus of the first section is the Trinity, which hides a wonderful selection of easy and also challenging gravel routes in its forests and hills. Fitting for the place of pilgrimage; to kneel down.

There was a short asphalt passage to Althofen, where it went straight north of the old mountain town – which reminds me a little of Tuscany, thanks to its striking tower – further north on gravel. Via Guttaring we came to Hüttenberg, where we even met a small group of ours who were solving the tasks on site. Since the access road to Knappenberg was also gravel, it was only logical to take this stage under our wheels as well.

Due to the testing we lost some time in the morning, which we now have to make up for with a faster stage. Maria Hilf to Silberberg is the last gravel stage before we return home at express speed after about 150km on gravel roads.

By the way, the Hotel St. Gabriel in Plescherken on Lake Keutschacher is currently our “at home.”
Together with the lakeside beach and the family-run restaurant MITanond, this is a symbiosis that can clearly play all its trump cards in this weather and with the current COVID regulations.
In addition, with the Valentinitsch campsite opposite the hotel, there is another location that offers more flexibility in terms of overnight accommodation.
To start with: both the hotel and the restaurant offer us a home away from home for the whole week, which we have come to appreciate very much thanks to the friendly staff and owners, as well as the excellent food, and would like to recommend to our readers.

So what could be more natural than to share our experiences together on the terrace in the evening and let the day pass in review?

Yesterday was already a nice teaser for today.
For today we will visit the border area between Carinthia and Slovenia and explore the gravel roads there extensively.

The tour starts in Ferlach at the Shell petrol station and goes straight to the Koschutahaus.
Strangely enough, the gravel road feels more and more sandy the higher we get. At the ultimate bend, the hut already in sight, we are suddenly met by a grader and behind it a road roller. I can swerve to the loose edge and continue uphill with a lot of gas from the deep, loose sand on the edge. Karin’s off-road mode is on, and the engine dies. Thats a byeffect of the KTM offroad mode: If there is too much slip on the rear wheel, it reduces the power, which is counterproductive in the sand and so the engine dies and she falls softly 😉
I can watch the drama from above – a construction worker tries to help her, but unfortunately the electronics prevent this. So I march down the steep slope, which is just being climbed by a funny school class, who of course witnessed everything live. After the off-road mode is off, the journey continues without any problems. I’ve been cold up to now, but on the reascent to the hut I get warm anyway.

Then it’s on to the Paulitschsattel, which is asphalted on the Austrian side, but still a nice challenge. On the Slovenian side there is currently a construction site diversion, which leads over gravel for the first 24 km.
From here, the road seamlessly turns into a panoramic road that leads to the church of Sveti Duh, still gravelled, of course.
The little dragon (Lintver) in front of the church is part of a legend about a flood and a shepherd boy.

From there, the route continues towards Spodnje Sleme (Wistrasattel) and Solcava.
Somewhere along the route there is also a memorial stone which – as far as we can make sense of it – commemorates partisans. Unfortunately, we don’t know why and wherefore. But maybe there is someone among the readers who knows Slovenian?

Slowly, the asphalt begins again, and with it, the road moves along at a brisk pace.
We return to Austria via Mezica, passing a border stone that commemorates the decision of St. Germain in 1918. Continue north to St. Georgen and near Globasnitz (past the bizarre villa trimmed to look like a castle) back to the border. There the route climbs via exciting gravel to the Luschasattel.

It is funny to find a normal road sign in the middle of the forest.
Shortly after the pass, the asphalt begins again. There is an inn that serves us a wonderful Brettl Jause (snack) before the final descent to Bad Eisenkappel, where Karin separates from us.
The temperature is now unbearable when standing and so we continue straight away. The rest of the return journey is again without any major events, and the evening ends comfortably on the terrace.