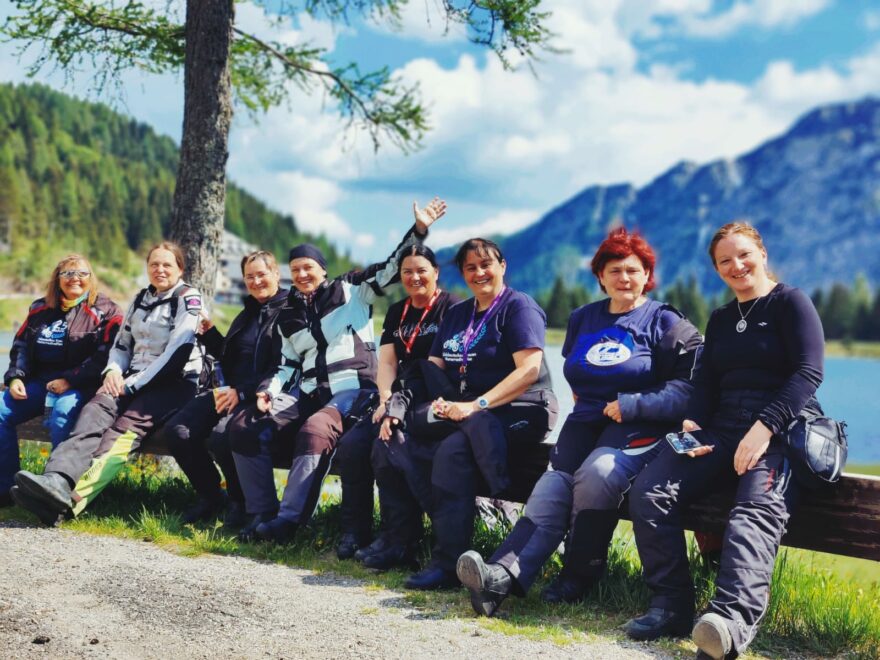 Day 4
begins with an early breakfast (made possible by a bus company present at the same time) at 7:00.
I still have to go to the post office to pick up my swimming costume, which has already been on an odyssey through Carinthia for two days. I might even be able to cool off in the lake this afternoon, as the forecast for today’s weather is hot.
There is even a little time left to enjoy the finale of the official breakfast on the terrace before we leave at 8:30.
The plan is simple: first head south, then up Monte San Simeone, continue to Tolmezzo to the Osteria Antica Valle, already known from last year, for a late lunch, and to finish, depending on the time progress, would be the Plöckenpass, or the Nassfeld as the way back to Austria

This could be the end of the article about this day. But Monte San Simeone was so special that it needs a few additional mentions 😉
It had been on my bucket list for some time and today’s trip was to finally put a tick under it.
But first things first:
First we drive to the Wurzenpass, where we fill up our tanks at the last petrol station before the pass – after all, Italy is not known as a low-price country as far as petrol prices are concerned – and also meet Karin again.
So we first enter Slovenia and then leave it again in the direction of Tarvis.
In Tarvis we spare ourselves the town centre because we immediately turn south again towards Predil.
There we follow the valley until we reach Lago del Predil, where we turn off in the direction of Sella Nevea.

This stretch is also very nice to ride, despite some construction work, and so we arrive quite quickly in Chiusaforte. Here we follow the course of the river with changing sides until we meet the Tagliamento.
From there it is only a short distance to Venzone (with its impressive city wall and old town) where there is also a bridge over the almost dry, but turquoise blue Tagliamento.

Thank goodness the path now leads through small woods in places, because the heat of the sun has become almost unbearable.
But the most exciting part is yet to come. Shortly after Bordano, there is an inconspicuous turnoff to Monte San Simeone. We stop briefly to split up. Part of the group has already had enough of the sun and prefers the fast ride to Tolmezzo to the Osteria. The intrepid (or just curious) among us drive up the mountain.The beginning starts harmlessly, slowly climbing until we are almost above Venzone again.
Then the hairpin bends start in short order. The road itself is just one car wide, exciting in case one should come towards us. The middle part is heavily wooded, a relief in the sun, and sometimes gaps give a view of the Tagliamento valley, which is now already deep below us.

We stop briefly at a larger bend to enjoy the view, then we continue our journey upwards. Somewhere we also meet a car, but as it stops in time, everything turns out well.
At some point, we have already passed the turnoff to the Chiesa (chapel), and the paved road ends. From here, the only way to continue is on gravel. In the shade of a group of trees, it’s good to take a breather, only Versya continues the stretch to the chapel.
The attachment of Karin’s GoPro (which got stuck) is also quickly cleaned up – unfortunately, as it turns out a little later – and then the ride down is resumed.

At the foot of Mt. San Simeone we wait together again, but Karin and Petra have disappeared. We wait for a while, then Versya turns around and rides halfway up the mountain again before she bumps into the two who are riding down the mountain. It turns out that the new! GoPro has fallen off the bike and they have tried to find it without success.
That’s really bad luck, but everyone has to go down to continue the ride, the group in Tolmezzo will already be waiting for us.
The rest of the ride has its charms and we arrive relaxed in Tolmezzo. And, even though the navigation system is spinning again, we always find the way to an osteria straight away 😉 and so we are soon sitting on the terrace of the restaurant.

We enjoy the delicious food, but the temperature continue to rise and so we finally leave to continue the ride north, to Pontebba, over the Sella Cereschiatis.
In Pontebba we just continue towards Nassfeld. There we stop very briefly for the last photo stop.

back past Finkenstein to the Keutschachersee lake. On the way, the bike is refuelled and cooled down at the petrol station. At the hotel the new swimming costume is tested and it fits perfectly.
On the spot, it is really necessary to jump into the lake to let the built-up heat under the motorbike gear dissipate.
After cooling down, we go back to the hotel terrace. This time the Italian day is extended and only Italian food is ordered from the menu 😉

A late breakfast is in order.
Afterwards there is a short chat with Karin. The loss of the expensive and actually new GoPro hurts, of course.
Spontaneously, Versya and she decide to drive down and search Mt San Simeone again.
The drive through the Canal Valley, with no motorway, is not as bad as we feared. Tarvis is actually the only bland section of the route and in Venzone there is even some time to look at the town in a bit more detail as well.
The way up to the “summit” of the route goes quickly. At the top, we use the opportunity to capture the all-round view with the drone before we start searching.

The only indication of the possible location of the loss is the sensation of running over an object yesterday.
Karin therefore tries to guide us to the place of the suspected loss, where we park our motorbikes nestled close to the rocks.
Now we start searching the embankment to the left and right of the road, even the command “GoPro switch on” is tried to persuade the GoPro to show a sign of life.
For uninvolved observers, we would certainly have been a funny sight: 2 figures wrapped in motorbike robes, uttering mysterious incantations while walking or crawling through the area bent over and airing grasses…
I actually expected to look a snake snoozing directly in the face at some point, but we were obviously so noisy that they must have moved away beforehand.
Despite all our efforts, we unfortunately don’t find the GoPro. Even the daring climb up the steep slopes does not bring any reaction from the camera: “GoPro, damm it ;- )”.

So after a good hour of searching in the scorching sun, we pack up the bikes again and Versya realises that the handle of her bike has obviously diverted an ant trail. Obviously right into her helmet 😉 Getting the mass of black creepy-crawlies out of her helmet is almost crowned with success, but a few Italian ants don’t get out again until we reach Carinthia.
Then the ride goes down into the valley. Here we are tempted by the turn-off for the ascent to Monte Festa, but this is now new on the bucket list and will be next time when there are fewer people on the road.
We drive back through the Canal Valley, stop briefly at a small trattoria and discuss the other options. But without bringing back at least a fraction (in the truest sense of the word) of the GoPro, we are tired of any form of insurance.

I still have time for a short coordination on site at the Pyramidenkogel for tomorrow’s event together with Renate and then finally a cool dive into the lake before the terrace and the diary calls too.

Slowly, however, the sky gets darker and darker, gusts and thunder come from the east and a massive wall of rain becomes visible, slowly, very slowly, approaching over the lake.

Berti and Iulia are just on their way to the meeting, and of course they get really wet in the last few hundred metres.
The rest of the group flees from the terrace to the inside of the restaurant for the first time. But better a thunderstorm today than tomorrow, otherwise it will be cramped in the restaurant 😉
But brave girls who drive to all the stations in this heat and try to find the information on the spot, that alone should be rewarded. The evaluation results in a clear order.
The available prizes are checked again and fit very well for the number of participating groups and participants.

This day is dominated by the impressive Pyramidenkogel tower!
That’s why I took it easy for the first time in the morning and only went for a short ride with Iulia.
Her 1250cc GS was the big surprise of last night, now she has to get used to the big bike. A leap from 125cc to 10 times that is not easy and the dimensions of the GS are not without their own. But she loves challenges, so she will master them.

As there is a busy programme at the Pyramidenkogel, we set off punctually in the group, as we don’t want to keep the mayor of Keutschach and his team waiting.
The arrival at the Pyramidenkogel is right on time and the bikes are lined up in front of the lookout tower.
The obligatory photo session with the mayor follows, who thankfully invites us to visit the lookout tower and then to the restaurant.
We take the lift up. Only the very sporty climb the stairs in this heat.
The view from the tower is magnificent, as always.
We use the selfie camera on site to take a group photo with background and ride or slide down again. 🙂

Arriving safely at the ground, we enjoy a good lunch in the restaurant belonging to it and a demonstration by Gripsmania on the topic: How do I set up my motorbike again? before the group makes its way back to Lake Keutschach.
At 6pm, the first, constituent general assembly of WIMA-Austria starts punctually.
All candidates are accepted with a majority and so we are quickly done with this formal act as well. (If you want to get to know the new WIMA board members, you will find them here soon).
And, that’s good, because we have guests! Our sisters from WIMA-Italia have sent a delegation to us and so the rest of the evening will be very funny. We position the Italians between Elsbeth and me (or Manuela from Wima Italia) and thus the problems of understanding are elegantly circumnavigated. Elsbeth finds a singing soulmate in the person sitting next to her and the mood rises.
In between, there is a short review of the already 25-year success story of WIMA-Austria and the award ceremony for the puzzle rally and DACH participants. Of course with the obligatory photo shoot.

The evening will be very long and the partnership of WIMA in Austria and Italy will get new ties. 🙂