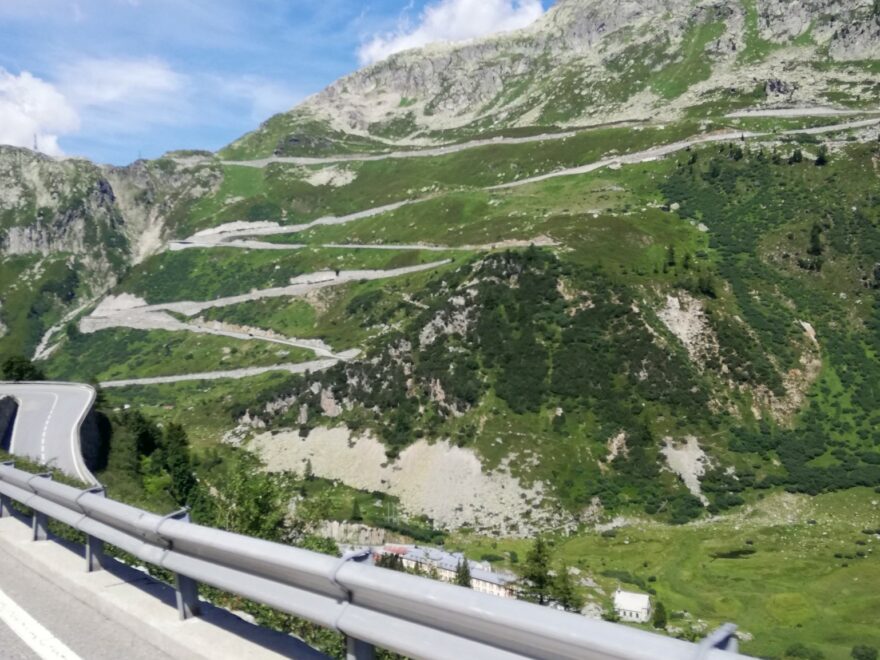 We have reached the last day of our journey to the rally in Switzerland and have still planned some route treats on our today’s route section.
All the more important is a good breakfast, so that we also go strengthened into the “finale”.
Here our host surprises us a little, we are served a counted breakfast.
Sausage leaves, cheese, croissant and pieces of bread are exactly counted and distributed equally to all persons. Apparently only one slice, or piece, is provided per person!
Fortunately, the pizza last night was so sufficient that probably also a cappuccino would be enough, but strange, and unusual, it is .

The rooms cost this time also about 67, – € per person, but were much larger and better furnished than in Pont di Lego. At 9:00 we start on time, first a piece back out of the valley of the Lucmaniel. Into the valley to the Gotthard, where we split up again. In a group that wants to ride the old Tremolo and the new Gotthard route. Both routes are wonderful to drive and so both groups arrive almost without an accident at the top of the pass. Versya had to use the stop before a traffic light to take pictures from the motorcycle down into the valley. What is her undoing in the process? An idle and a decent downhill. As the motorcycle slowly moves downhill, the dilemma – camera or motorcycle – is decided in favor of the camera and so the fully loaded motorcycle now lies there. As always, spectators rush to help, and so not even the group, which has already started moving again, notices anything about this incident. God praise, otherwise the reputation would be scratched once again a little. But so no one noticed. 🙂

At the pass, despite the early time, we are greeted by a mass of motorcycles, but still find a sufficiently large gap with space for us and then begin a small exploration tour on foot. We attach our stickers again, of course.

And then it’s already downhill again. Hardly arrived down, shortly before Andermatt, it goes already to the left off in the direction of Furka pass.
It is now a little later and the traffic has already increased. Especially the motorhomes are rolling obstacles for most vehicles and so the first queues form.

Since the Swiss motorcyclists present seem to have more inhibitions to use gaps for – exciting – overtaking maneuvers, Claudia and Versya overtake all the columns in a start (valley floor) – finish (pass summit) run and then make themselves comfortable (in pairs, but alone) at the pass sign.

It follows with the arrival of the others the obligatory photo shoot and sticker attach and then it goes already again, past the already once overtaken cars, further to the Belvedere bend which is also besieged by tourists.
From there there is a constant view of the impressive Hmmelsleiter of the Grimselpass, which is waiting for us at the end of the Furka.
Arrived in the hollow, we wait again briefly together and then it goes already again up.
Unfortunately we see at one of the first hairpin bends the remains of a collision of two oncoming motorcyclists. But since there are already enough helpers on the spot, we make room and continue.

The sun is still hot, but at these heights it is only a pleasant side effect.
After the Grimsel Pass summit (also with photo stop) we finally descend towards Innertkirchen,

where we refuel and (unfortunately) treat ourselves to a snack in the Restaurant Post. The price-performance ratio is aimed at Swiss motorcyclists, they turn the round between Susten and Grimel-Furka. (A kind of Kalte Kuchl just, but with Swiss prices and completely overcrowded) Accordingly, it also takes longer than planned before we take up the final route in the direction of Melchtal, where the rally starts.
The rest of the drive is without any complications and so we arrive in great heat at the youth camp in Melchtal.

Iulia and Berti are already there and their tents are already up, the “Platzwärtin” Elsbeth assigns us our pitches and so we peel ourselves out of the boiling hot motorcycle garb and set up our tents as well, or move into our quarters in one of the many accommodations in the former army barracks.
After that is done we go to the registration and to the drink Ausfassen. The liquid evaporates literally on the tongue. The goodie bag has the obligatory rally shirt (in bright blue) as well as reusable cups that will accompany us throughout the rally to reduce waste.

When everything is set up we sit down under a prov. sun awning and watch the hustle and bustle around the arriving WIMA’s and the parking lot slowly (overcrowded). Then Su, Sabine W, Diana and Gea who arrived by train from Feldkirch also arrive.
Bärbel has already erected a tent similar to a sugar loaf and so there is room for almost everyone.
Before the sun goes down, and it becomes suddenly fresh, a shower is announced, in order to rinse off the sweat before the night. The hair must remain dry so far, because for tomorrow we have already braided the national colors in the hair.

Dinner is held in the marquee and is designed calorie rich. After that there is another cozy round in front of the tents. There is a really blood-red evening sky that looks wonderful and ends in a terrible thunderstorm.
For a few tents the acid test in terms of rain resistance and wind stability. Not all will make it 😉