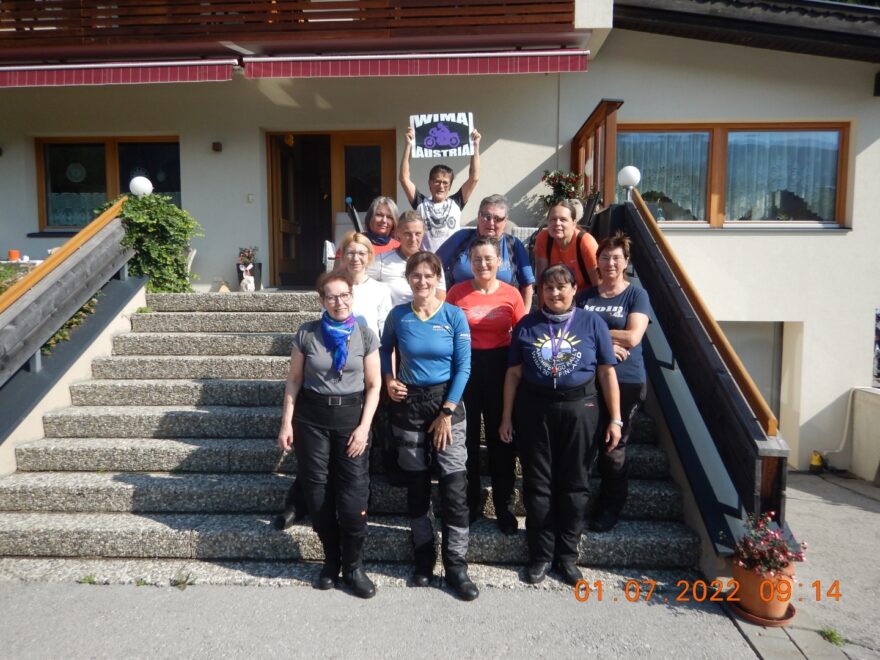 We meet at the Steinhäusl junction at about 9:00 and from there we drive (4 people up) a little further on the A1 before we head off into the foothills of the Alps at Melk.
Via Scheibbs and Gesäuse we go to Admont, where we have our first fuel stop.
We continue over the Triebener Tauern to Murau, where we visit the Hotel (Restaurant) Lechner, already known from the WRWR Ripple.
During the meal Versya repairs her mirror. The KTM apparently did not like what is mounted there so and simply threw off the left mirror.

An aluminum sheet strip surgically taken from a beverage can fills the gap in the thread so well that no more loss is to be feared for the time being.
Then it goes in the direction of Turracher height and on the other side again down. Shortly before the Millstättersee we catch up with Astrid, who is just in a repair-related catch-up chase to Sonja. Now she joins us and so it goes comfortably past the Millstätter See into the Drautal in the direction of Lienz. The clouds that push themselves over the Lienzer Dolomites do not look good at all. A look at the weather radar shows that an ugly violet spot is moving in the direction of Millstatt and is still touching us at the edge. Despite a few drops we do without the rain gear and continue briskly in the direction of Lienz.
Unfortunately, we have made the time and rain calculation without the obligatory Lienz traffic jam. 2km before the entry traffic circle everything stands. It takes quite a while until we are past this knot and can resume driving.
We are just before the goal, at height of the junction to the Lesachtal, when a downpour breaks over us. We seek shelter at the gas station, bring out our rain gear, refuel and continue our journey for the last 4 km as the rain subsides. When we arrive at Hotel Sprenger, Bärbl, Sonja and Hanna are already there. Claudia and Elfi arrive a little later as well.

The evening is spent sharing a variety of mishaps and weather experiences before ending at approximately 22:30.

Already in the morning it is clear, it is raining outside and heavily.
Also, the news along our path yesterday show stone quarries and mudslides.
We let Berti and Iulia know, so that they can also take this into account on your journey today.
We decide to wait a little while having breakfast. To bridge the waiting time we do a Q&A round about GPS and NAvigations Apps.
and lo and behold, there are some question around Garmins, TomToms, Kurviger and Co.
Even stubborn cases like TomTOm not syncing with the app are solved.
The swarm knowledge solves every case here.

For the Zoom GV evening I still need a DSP to HDMI adapter, since my new laptop has HDMI as standard, I have not thought of the travel laptop to bring an adapter.
The hotel boss gives the good tip and the local electronics dealer is actually so well stocked and has the part in stock! Because we are already in rain gear, we visit the town center of Sillian, which is unfortunately cut by the busy highway.
We stop for a bit and finish our sightseeing tour.
Only in the evening, so about 16:00 the rain stops and is abruptly replaced by the sun.
So we make another round to Heinfels Castle, which towers imposingly on a rock in the neighboring town.
On the way there is also a shopping mania on sports shoes, which ends in 4 identical pairs of shoes, which will now go with us further on the trip.

The castle is unfortunately already closed, but also the short hike around the castle is worth seeing and attracts with views.
When we return to our quarters, Berti and Iulia are also there. Thus we are – for the time being – complete.

The morning is sunny, until the evening new thunderstorms are possible.
So it’s time to use the planned round trip and via Pustertaler Höhenstraße, Lienz, Gailberg height, Plöckenpass, Zoncolan, Comeglians, and the 355 via Sappada , and as a conclusion, before San Candido, Croce di Comelico. There then closes the circle with Sillian.

In Lienz again the obligatory traffic jam, although not as extreme as on the day of arrival, but in Oberdrauburg it goes right back into the mountains and thus cooling is guaranteed again. The same applies to Kötschach Mauthen, the Plöckenpass is virtually in sight and with every meter of altitude the temperature drops again.

The speed of the individual riders varies, which was to be expected given the size of the group. SO there are always short breaks so that everyone can catch up before continuing again.
Since the roads in the valleys are used by normal traffic, there is always an obstacle in the form of a truck or a bus. But we are not in such a hurry, although overtaking is not a problem for a motorcycle, even on these routes.

Now it’s time for showers and the preparations for the General Assembly (GA) are still to come.
First we eat and check the “technique” and then we can start with the AGM.

This runs on virtual channel and directly on site. Some future arrangements are discussed and some agenda items are worked through.
Also new members are accepted and also the board is further rejuvenated.
WIMA-Austria lives, grows and positions itself for the future, that’s for sure!

We drink to it and reward ourselves with chocolate