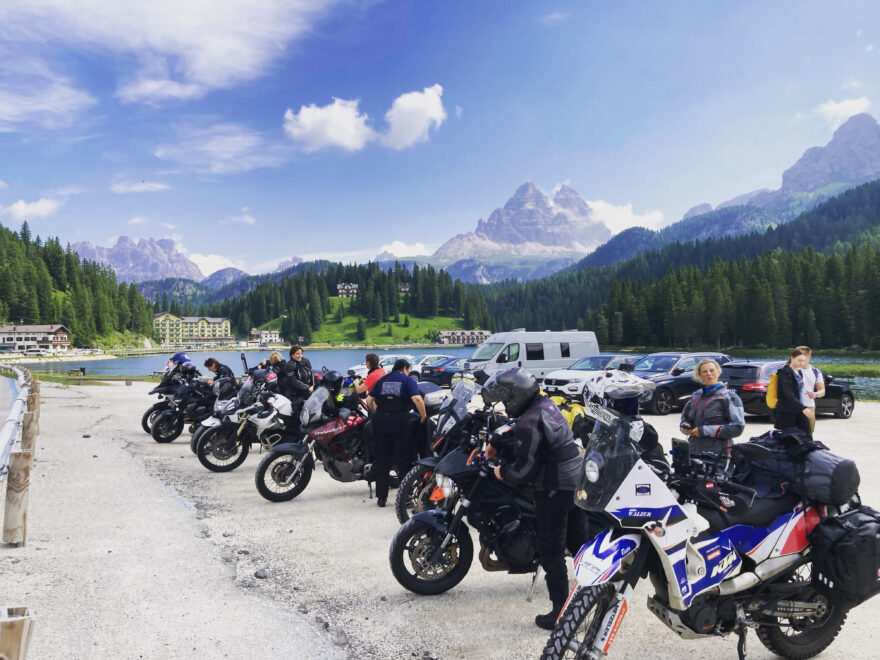 For us, a rally always begins with the first kilometer of the journey.
That has always been the case, and is also the case this time.
Although we have already spent the last few days in Sillian to celebrate our DACH meeting, the real part of the journey starts now.
This would of course also be possible via Felberpass crossing and then Gerlos, freeway to Feldkirch and further into Switzerland to behind Lucerne. That would correspond to about one travel day. But, that’s not WIMA style (at least not always 😉 ).
We have the Dolomites, South Tyrol and northern Lombardy in front of our wheels and that we will use the next 3 days extensively.

So today becomes a 5 (counting only big ones) passes day.

The morning starts with sun and warmth and so we head west away from Sillian.

Shortly after the border there is still a small construction site traffic jam, but as soon as we turn off the main route and sink into the smaller roads we make good progress.

First the 3 Peaks accompany us on our way to Cortina d’Ampezzo, the roads are wonderful, the delightful rock formations of the Dolomites as well.

And so we swing along as a large group. After a few photo stops we reach Cortina, we scurry with the tourists through the town, rather looking for eienr gas station, which we find – completely overcrowded – also near the town center.
Here we refuel (uncomfortably) and then we look to leave Cortina as quickly as possible. The further way leads us in the direction of Etschtal via Falzarego and Pordoijoch. Before that we stop for lunch in one of the picturesque South Tyrolean mountain villages. The staff speaks German! The food is Ok, but the heat, despite the altitude, drives us further into the Etsch Valley south of Bolzano, near Auer.

Above the Josefsee we make a heat-related stop in the shade (the heat here in the valley is almost unbearable).

There in the shade the already adapted prov. ignition key of Astrid breaks off.
But we have enough tools and material with us to solve that too and allow Astrid and her Honde to continue. Over the Mendel Pass and the Tonalle we arrive at our destination in Ponte di Lago.

We have a nice hotel in the center (the rooms are relatively small, but clean) and also the recommendation – the restaurant de Marco (expensive, but really good) not too far away is good.

Weather sunny and warm, in the final damp track, but no rain
Temp 17-26
route about 300km, only curves